If you love coffee like I do, you wouldn’t think of starting your day without a cup or two of your favorite coffee.  Like me, it helps your brain wake up, helps you think more clearly, and helps you get on your way for the day.

But did you know that drinking coffee regularly has another really important benefit – especially as you get older?

As amazing as that sounds, a recent study out of Cornell University proved it to be true. Researchers found that drinking a daily cup of coffee can help prevent vision damage, especially the type that comes with getting older – retinal damage.

And if you gave up coffee drinking because of the caffeine you can still get the vision protection.   That’s because the active ingredient in coffee that protects the retina is CLA – chlorogenic acid.

Researchers found that chlorogenic acid is a powerful antioxidant found previously to prevent retinal damage in lab animals.  The retina is the part of your eye responsible for refracting light coming into your eye.  It’s what allows you to make visual sense of the world through delineating images.

To do this important job, the retina needs a lot of oxygen.  This can make it more subject to oxidative stress from free radicals.  In lab animals tested, nitric oxide was administered to create oxidative stress and retinal damage.  Yet, the animals who received a pre-treatment with chlorogenic acid did not develop retinal damage.

As a result, exciting new avenues of research are being undertaken in the study of CLA for treatment of retinal damage.  If CLA is found to cross the blood retinal barrier – meaning CLA can be carried through the blood to the retina – then doctors can simply prescribe a certain type of coffee to drink to prevent/treat retinal damage.  But for now, you can get the same benefit just by drinking your same cup of coffee every morning.

But protecting the retina isn’t the only health benefit recently attributed to coffee.   It has also been found to cut the risk of these other age-related conditions as well:

What Else Can You Do To Protect Your Retina?

Protecting your retina essentially involves fighting oxidative stress damage from free radicals.  This can increase as you get older if you don’t take steps to block, or neutralize, it.  Besides your daily coffee, here are some other things you can do to protect your retina:

1.  Nutrition. A high antioxidant diet helps minimize oxidative stress throughout your entire body.  Antioxidants include astaxanthin, lutein, zeaxanthin, vitamins A, C, E, zinc, gingko biloba, turmeric, selenium.  Omega-3 fatty acids, like those found in fish, krill or flax seed oil, have also been found to be beneficial to the retina.  They help prevent blood vessel damage/loss which leads to the formation of new, deformed blood vessels.  These deformed blood vessels lead to the retina pulling away from the back of the eye causing blindness.  Also, limit/omit refined sugars.  These can cause a lot of inflammation in your body from too much acid.

2.  Protection.  Bright sunlight can damage not only the retina but the lens and result in cataracts. Wear protective sunglasses with a high UV ray blocking capacity.  The best glasses block 100% of UV rays and HEV (high energy visible) rays.  Glasses that wrap further around to cover the entire eye prevents light getting in from the side.  Also, prevent trauma to the eye. Retinal damage/ detachments occur most often after trauma to the eye.

3.  Regular eye check-ups.  Seeing an ophthalmologist once a year – especially over age 50, and if you’re diabetic – is important.  A retinal exam is done where special drops are placed in your eye.  The eye doctor is then able to see the back of the eye, where the retina is, to look for tears, floaters, etc.  Dark spots that bounce around in your vision are called “floaters”.  They occur when tiny bits of vitreous humor break away. They are usually harmless but could be a warning sign of retinal detachment – especially if you have a “shower” of them occur at once.

4.  Regular medical care.  As you get older, it’s important to also get regular medical check-ups and lab tests to look for diabetes.  It’s one of the major vision robbing conditions and people over age 50 are at higher risk of developing type 2 diabetes.  In addition, cardiovascular disease can also affect your eyes and vision.  If your heart’s blood pumping ability is impaired, your eyes won’t receive the nutrients and oxygen they need.

5.  Aerobic Exercise.  Your eyes also benefit from aerobic exercise as much as the rest of you does.  Aerobic exercise builds your oxygen intake capacity and that oxygen travels via your blood stream to your eyes.

Protecting your vision at any age is important but especially so as you get older.  It should be one of the primary concerns in fighting aging.  Keeping a healthy vision will allow you to stay independent and maintain your activity level as you get older.  Having a simple cup – or 2 – of coffee every morning is a good way to start. 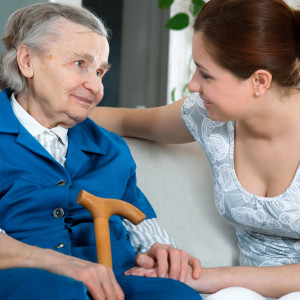 Did you know that approximately 7% of seniors suffer from depression? It’s one of the most under diagnosed mental health issues amongst seniors.  Its symptoms are often simply thought to be short-lived reactions to physical health changes, losing lifelong friends/spouses, or financial issues.  As a result, it frequently is undiagnosed and, consequently, untreated.

Another mental health disorder that may go undiagnosed/untreated in seniors is early dementia.  About 8% of seniors over age 65 have early dementia.  This rate rises with age to 35% over age 85.  Although some memory glitches are normal as you get older, memory loss accompanied by frequent mood changes, confusion, and loss of reasoning is not.

In addition, many younger family members brush off mood changes in their senior parents as “grumpy old man” syndrome, or mom just got up on the wrong side of the bed today.  They often just attribute mood changes to inevitable aging.

But, dementia can also be the result of high blood pressure, blood vessel damage, a prior stroke, or series of small strokes called TIA’s (transient ischemic attacks).  It can also occur from a lung condition where oxygen intake to the brain is impaired.  Lack of adequate oxygen to the brain can result in loss of memory as well as behavior changes.  Dementia can also occur as a side effect from certain drugs, drug interactions, nutritional deficiencies (particularly B6 and B12), from poor diet, untreated diabetes, thyroid or adrenal gland disorders.

If mood changes occur on a regular basis, and/or if normal reasoning starts to change, it could be pointing to early dementia that should be evaluated.  There are several other neurological disorders that could account for the dementia symptoms as well.  These include Huntington’s disease, Parkinson’s disease, Lewy Body disease, or Alzheimer’s.  However, new treatments can prolong their progression for much longer than in the past.

If mood changes occur on a regular basis, and/or if normal reasoning starts to change, it could be pointing to early dementia that should be evaluated.  There are several other neurological disorders that could account for the dementia symptoms as well.  These include Huntington’s disease, Parkinson’s disease, Lewy Body disease, or Alzheimer’s.  However, new treatments can prolong their progression for much longer than in the past.

Anxiety is another issue that can start to commonly occur in seniors.  It’s seen most often in those who are retired and not as active socially as they used to be; or they may have lost a spouse, or good friend recently.  They may become anxious and distressed about the future.  They can become chronically sad, hopeless, and even develop a nervous disorder.  Insomnia can also be part of their symptoms.

To make matters worse, seniors won’t often admit any of these feelings to their family, or doctor, for fear of being thought of as frail and old.   Yet, treatment for anxiety and its symptoms is fairly simple.  Options include temporary, or long-term, medication, one-on-one therapy, creating new social outlets, and engaging family members for more involvement in the patient’s life.

Many seniors suffer in silence with all these mental health issues when they don’t have to.  As a result, suicide, has become another rising concern amongst seniors.  If you start to think that suicide is an answer to all your new and troubling feelings, your doctor can get you the help you need fast.  Often, what’s needed is a new direction in your life, setting new goals, finding things you enjoy doing, and creating new social outlets to help you make new friends.

Help Yourself, Help A Loved One

If you, or a friend, relative, battle with any of the above issues, your doctor is your first line of defense.  Don’t be afraid to tell them what’s bothering you, whether it’s anxiety, sleeplessness, nervousness, memory glitches, poor mood, feeling lonely, or just plain feeling bad.  It may be helpful to keep a diary of your feelings to try and identify a pattern in them, some specific thing that may be causing them.
Keep in mind that these issues can have easily remedied causes, like nutritional deficiencies, developing better sleep habits, getting more exercise, or adjusting medications.  Also, take a friend, your spouse, or your kids, into your confidence and let them know how you’re feeling as well.  People around you can’t help what they don’t know about.

If you’re the friend, spouse, or relative of someone who seems to be battling these issues, try to spend more planned time with them.  Help them develop a new goal to work toward, or help them find a social outlet, or activity, they can get involved with.  If their mental issues seem to be more medically-based, don’t hesitate to get them to a doctor, even if you have to take them yourself.

Getting older has a lot of challenges, both physical and mental.  But, you can stay healthy and mentally vibrant long into your old age.  Recognizing, and addressing, these mental health issues as they occur, can help you get help much faster.

Get the latest news, tips and advice for your practice!

Dr. Mark Rosenberg received his doctorate from Georgetown University School of Medicine in 1988 and has been involved with drug research since 1991.